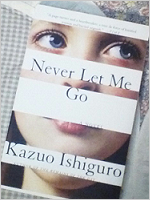 Have you ever picked up a book knowing that it is going to be a tough read? You know you are going to feel a lot of things while you read it and they might be uncomfortable feelings. I had a sense that Never Let Me Go by Kazuo Ishiguro would be like this even though I went in blindly when I read it. I was right. I didn’t cry, but at the end I just kind of sat there and stared at the closed book. I took a day or so to think on it before I tried to write this post. My thoughts might make a little more sense now. Maybe.

I’ve read The Remains of the Day and The Buried Giant by Ishiguro and they both feel foggy to me. Not everything is explained. I feel like there is a fog around the plot and characters. The fog begins to clear as you read, but your “vision” is still slightly fringed on the edges by the end. I like that about Ishiguro, but some people do not. I like having open ends and questions. It keeps me thinking about the text even days, weeks, or months later.

As I said I went in not knowing anything about the plot except for what was on the back of the book. The description of the plot was vague though and in case anyone reading this hasn’t read the book I won’t spoil anything. Not knowing anything about the book is really the best way to go into it. One of the most interesting things while reading the book was guessing exactly what is going on with the students. You get hints here and there, but things aren’t spelled out until the very end. Even then I had some questions about certain things, but I felt like it was summed up pretty well. I felt like the world was built up just enough, but I would have been happy to see more of it too.

In my opinion one of Ishiguro’s strengths is building characters. A character in the novel would do something very small and I would be reminded of people I knew or even myself. The characters felt real, familiar, and very human. Some people might find the characters in Never Let Me Go passive or flat, but I don’t feel that way. Sometimes a character might not say something they feel or cover their feelings with anger or they may misdirect the conversation. This may make them feel like they are unable to be strong or proactive in their lives, but I don’t see it that way. People do that sort of thing all the time in real life. The characters in this novel are dealing with some very serious things and their culture is against them. They can’t make sweeping changes. This isn’t a fairy tale where happy ending always come when things look darkest. It is a story about society, reality, and life. It makes you question things about your world.

This is a heavy book that will spark discussion. I loved it even though I was left emotionally disturbed. It is definitely worth a read if you can stand a rather slow pace and the “fog” I mentioned above.