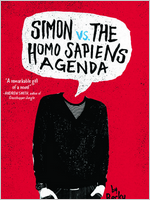 Simon vs. the Homo Sapiens Agenda by Becky Albertalli is about a sixteen year old boy named Simon who is gay. Simon has made a connection with another student at his high school, but he doesn’t actually know who that student is in real life. He only knows him by his screen name, Blue. They share their lives and deepest thoughts with each other through an anonymous relationship. This includes the fact that they are both gay and they seem to be falling for each other. Simon’s e-mails slip into the wrong hands and he is suddenly being blackmailed by another student. Simon must help his blackmailer or have the whole school find out he is gay.

I guess you could call the book a romance, but I really believe it is much more than that. It is a coming of age story with a lot of importance. I know some people have probably already tuned out once I mentioned that Simon is gay. I know some people are sick of the “homosexual agenda.” I don’t care. This book isn’t perfect, but it has merit. I knew a boy who came out, was disowned by his family and eventually killed himself. He was a good person who didn’t deserve the treatment he got for just trying to be himself. Simon vs. the Homo Sapiens Agenda deals with some heavy topics, but it is a genuinely funny book. The plot had enough twists, turns, and strong morals to keep me interested even though I generally loathe anything resembling a romance. Issues of sexuality and growth aside, just for keeping me interested in the story and characters I would recommend it.

Now for what I didn’t like. I can completely understand a feel good coming out and coming of age story, but everything came out a little too perfect for me. Simon definitely got some negative feedback from coming out (I don’t consider this much of a spoiler), but it didn’t seem to effect him that much. I didn’t feel like it was much of an accurate representation of other students’ reactions either. Maybe I’m a little cynical, but it felt pretty easy for him in the end. I’m sure there are plenty of coming out stories that end up mostly fine like this, but from my experience I expected more of a challenge for him. I realize it is hard for me, a white, straight female, to judge the authenticity of such a thing, but I’ve known some very cruel people reacting to the issue of homosexuality.

Honestly, that’s my biggest issue with the book. Other than that I liked it a lot. The supporting characters weren’t very deep and neither was Blue in my opinion, but it was a good light read with some important themes. I feel like it could be helpful to someone struggling with coming out or understanding (at least a little of) what a friend who is coming out is going through. I will say that I didn’t like the high school vibe and lingo, but it wasn’t as bad as a lot of books in a high school setting and really that’s mainly just because I hated high school drama as a kid.