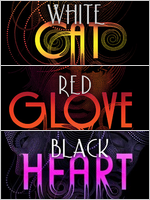 Apparently this is the year of trilogies for me! Here is another young adult trilogy, but it is actually surprisingly good. As I’ve mentioned before, I have yet to find a Holly Black novel that I really like. I love the sound of her ideas, but I find her execution of them often lacking. I’m not a big fan of her writing style and her young adult books usually have a “I’m trying to be cool and edgy vibe” that I dislike.

Anyway, White Cat, Red Glove, and Black Heart take place in an alternate version of Earth where a small percentage of the population have powers. The people with powers are called curse workers (or just workers) and they use their powers by touching their bare hands to other people or objects. The powers include things like emotional control, influencing luck, or even dealing death. Because of the serious consequences of touch everyone wears gloves. These powers are often inherited which leads to the formation of crime families. Our main character, Cassel Sharpe, finds himself powerless in the middle of a worker mafia situation.

The first book, White Cat, is an addicting adventure with a solid premise and interesting cast. Red Glove, the second book, lacks some of the magic of the first. The second book does not feel as tight in the plot department. There is a lot going on in the second book and some of the situations with authority do not feel realistic. It is a little hard to believe some of the plot points and the teen romance drama took up too much of the story for my taste. Black Heart‘s plot still deals with relationship issues, but it does not put the gritty part of the story on the back-burner as much. I am a little disappointed that I guessed all the parts of Black Heart‘s ending, but is a good ending.

Black’s writing style is “no frills.” There aren’t lengthy descriptions, but there is a lot of dialogue and action. This makes for a fast paced read with a mysterious, page turning plot. From the start there are a lot of things that don’t quite add up and need to be figured out. The mysteries are not blindsiding when they are unfolded, but there are a few small surprises. The magic system is actually very interesting and the world built around it feels realistic. There are political issues with identifying workers, worker rights, and a social stigma against bare hands. This creates some interesting situations for the characters. Speaking of the characters, they are fairly well developed. They are nothing too original, but most of their actions make sense and their personalities are easily distinguished from one another. There are a few young adult tropes in the mix that I dislike- for example the special snowflake syndrome and obsessive love- but they aren’t too distracting.

If you’re OK with some young adult genre angst and the plot sounds interesting, I would give it a try. It is a fun little series and I enjoyed the fast paced, crime-filled ride. I wouldn’t say I’m now a Holly Black fan, but I am glad I gave her work another chance.