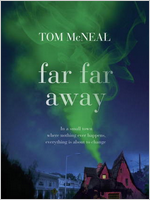 Hmm. This one really had potential. Far Far Away‘s selling point for me was the fairy tale inspired plot. There are a lot of strange things going on in the town of Never Better. Jeremy Johnson Johnson (yes, his middle name is Johnson) and his father are facing foreclosure on their bookstore home and Jeremy’s ghostly friend, Jacob Grimm of the Brother’s Grimm, is looking for someone called the evil Finder of Occasions. Jeremy’s bookstore only sells two books, the two volumes of his grandfather’s autobiography. There’s a strange green smoke coming out of the town bakery the night before enchanting cakes appear on the shelves. Jeremy can hear ghosts and children are disappearing in nearby towns. There is a lot going on, but somehow it all sort of falls short to me.

I can tell that the author was going for a charming fairy tale feel in his characters with names like Conk Crinklaw, Ginger Boultinghouse, and Jeremy Johnson Johnson, but their names are the most interesting things about most of the characters. Despite the first one hundred pages of the book being mostly character backstory they do not feel fleshed out. Conk is big bully, Jeremy is the weird nerdy kid, and Ginger is the quirky (in my opinion annoying) girl with catchphrases. The bad guys twirl their mustaches with little motive explained for their actions. Jacob Grimm would be interesting if he wasn’t just the repetitive and uptight voice of reason for Jeremy. I have issues with some of the characters’ voices and actions too. The children are supposed to be fifteen years old and yet sometimes they act older or younger.

There seems to be too much going on in the plot and yet none of it really matters that much or isn’t explained as much as I would like. I could see every twist and turn in the story a mile away. It is likely that the author draws upon fairy tale tropes intentionally, but predictability makes for a boring book. The story climaxes and suddenly takes a dark turn in the last one hundred pages then everything is hurried to an end. This leaves some unanswered questions and a lot to be desired for a fulfilling ending. The ending tries to be emotional, but I wasn’t invested enough in the characters to have much of a reaction. It’s a shame because I really thought I would enjoy this more!