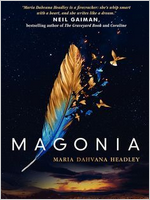 I’m still unsure what to think of Magonia by Maria Davana Headley. Aza Ray has problems breathing and has ever since she was a baby. She is now sixteen and has survived against all of her doctor’s expectations. But something strange is happening to her. She begins to see ships in the clouds and she hears a voice calling out to her. She is suddenly thrown into a political tug of war in a world in the clouds- Magonia. There are sky ships, pirates, talking animal hybrids, magic, and many more strange things. The book looks beautiful and has many amazing ideas, but I am left feeling unfulfilled.

I love the magical realism in this book. The idea that there is a whole world at the edge of our reality is great. The author incorporates folklore and myths into the building of Magonia its the creatures which is also great. There are so many great ideas to work with in the novel, but it just didn’t quite work for me. The world of Magonia just feels so hollow. Underneath the beauty of the descriptions is a lack of substance. I have so many unanswered questions about how the magic works in the world. Magonians can do incredible things simply by singing, but how does it work? Is there any drawbacks to using it? What are the limits of this power? Is everyone this powerful? I also have questions about some of the weird creatures and objects in the world. It is difficult to wrap my mind around some of the oddities and I don’t feel like the author did a good job explaining things. At one point Aza just chalks the weirdness up to “magic” and does not question how it all works. For a character who seems to be so knowledge hungry she sure shrugs off some crazy stuff!

This leads me to the characters… The novel is written in a stream of consciousness style. I’m generally not a fan of this writing style and this novel is no exception. Aza rambles and her voice is very teen-like. I’m not even sure if teenagers speak in such a dramatic way. I can see what the author was going for, but I found it annoying. Some chapters are told from Aza’s friend, Jason’s, point of view. I couldn’t stand him either. He sounds very similar to Aza. If it wasn’t for the fact that he recites pi and brags about his money and online connections I would be hard pressed to tell who’s head I’m in.

I desperately wanted to love this book, but it is just OK. It seems like it is trying to be weird just to try to be original and it doesn’t bother to explain itself. There’s still typical YA tropes (girl who doesn’t know she is special or beautiful, possible budding love triangle, girl turns out to be the most powerful person). There is going to be at least one sequel to Magonia and I will probably pick it up. I think that if the world becomes more fleshed out I will enjoy it more so I still have a little hope.