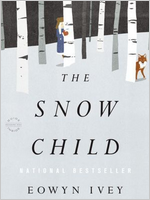 Sometimes I put off reading a book because I just know that it will make me cry. And sometimes I just don’t want to have a cry when I read. The Snow Child by Eowyn Ivey is a quiet and heartfelt novel of longing and love. Mabel and Jack move to the Alaskan wilderness to start over after they find they are unable to have children of their own. During the first snow of winter they build a little girl out of snow. The next morning the snow girl is gone, but a wild little girl appears in the forest every winter after that.

So yes, I teared up reading this. The characterization is not perfect, but I cared enough about a few of them to get emotional. Mabel and Jack are written the best. Mabel is kind and loving, but she worries a lot. She has a lot of baggage on her mind, but over time she settles in and shows real growth. Jack is a little too much of a stereotypical man. He keeps his feelings inside too much and tries too hard to do everything himself, but he grows too and watching Mabel and Jack over the years is heartwarming. Unfortunately the other characters do not have enough screen time to truly shine and the child herself is too much of a mystery to connect to.

The Snow Child mixes reality with myth and it is rarely clear where the line between the two begins and ends. The plot is quite good, but the parts involving the little girl are the best. There are so many questions about her and having to wait until next winter to hear more about her takes a little too long. However, maybe that’s the point? Since Mabel and Jack excitedly await her return every year perhaps Ivey wrote the book in such a way that the reader gets the same eager feeling for the chapters about winter. The worst thing- and what kept the novel from being a favorite- is that the ending is predictable. I won’t say too much about it, but I saw the ending coming from a very early point in the book.

The Snow Child paints a beautiful picture of the Alaskan landscape, love, and the meaning of family. It is definitely worth reading, but I think the journey to the end is better than the ending itself.