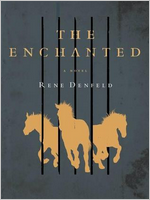 I’m still reeling from this novel. The Enchanted has gotten its fair share of attention  recently and I would say it is well deserved. The novel is about both life and death. It is told from the perspective of a death row inmate in an old prison. The narrator is somewhat unreliable, but he tells the intimate stories of other characters while leaving readers guessing about his own tale.

This novel deals with a lot of hard hitting topics like rape, abuse, mental health, and of course death/the death penalty. It deals with these topics through beautiful prose and a heart wrenching narrative. The novel isn’t for the faint of heart, but it is well worth reading. I have a lot of anxiety about death and the novel did send me into a mild, throat closing panic so beware if you’re sensitive to the aforementioned themes.

Though many of the characters remain nameless they have a lot of heart behind them. There’s the kind, suffering warden, the mysterious lady who struggles with her job, her past, and her future, the fallen priest, and the innocent white-haired boy to name a few. Interestingly, mainly the “evil” characters have names like Conroy the corrupt officer and the inmates. But are they really evil? Is anyone? Are people sometimes misunderstood? Does anyone deserve to die? Every characters is gray, everyone has a story, and nothing is black and white.

The way the novel is narrated sometimes made it a little confusing, but once you are acquainted with the writing and characters it isn’t difficult to tell who is being spoken about. How the novel can be interpreted varies and many pieces of the story are missing, unexplained, or only hinted at, but I believe that is a strength. This is an oddly powerful novel. It isn’t exactly an enjoyable read, but it is a good read.