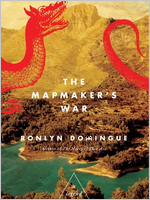 Aoife has always been a spirited girl and only by chance she is able to pursue her interest in map making. She adores the freedom and travel opportunities she has as the kingdom’s mapmaker. On one of her travels she makes contact with a strangely peaceful village that she finds very difficult to leave. As Aoife grows older she is pressured by her society and her family to settle down, but her past discoveries and free spirit make conforming to her role as a woman very difficult.

I was very impressed by this novel, but one of the biggest complaints I have seen from other reviewers is that they dislike that it is written in second person point of view. I agree that this is an odd choice, but overall I liked it. As a female reader and lover of role-playing games I found it easy to slip into the main character’s skin. It added to my immersion in most scenes, but my concentration was sometimes broken when the novel said “you” did something and I knew I would have made a different choice if I were truly the main character. Since much of the novel centers around a female’s role and feelings in an oppressive society I am curious how a male reader would react to “being” the female lead character.

Some of the characters remain nameless throughout the novel which may bother readers, but I thought it made the book feel more like a fairy tale. Since it is primarily a specific group of characters that lack names I am guessing that the author’s reasoning goes a bit beyond that though. With or without names, I enjoyed the cast of characters and most important ones were well fleshed out. I cared enough about a couple to get teary-eyed.

The novel is short, but feels expansive. The heavily focused second person narration does seem to limit some of the world building. I really wanted more information about the cultures and people around Aoife. Though the novel is partly a fantasy adventure the focus is on Aoife’s life. Because of this there are strong themes of feminism, duty, and conformation/rejection of society throughout. This novel is the beginning of a trilogy and I am very eager to read what follows. Hopefully the world and myths surrounding it gets more depth added to it in the next books.