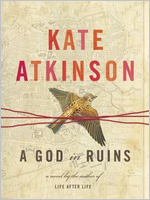 This is a companion novel to Kate Atkinson’s Life After Life. While Life After Life is about the character Ursula, who dies and relives her life differently each time, this is the story of Ursula’s brother, Teddy. During Life After Life we see parts of Teddy’s story, but this novel gives a full view of Teddy’s regrets and triumphs. Atkinson once again plays with time as A God in Ruins jumps back and forth during Teddy’s lifetime and memories. I don’t feel like you need to read Life After Life to appreciate this novel, but having read it does give you a broader sense of what is going on.

OK, now that we have all that out of the way, onto the review. I’ll start by saying that I liked Life After Life more. It had a more interesting premise. I was excited to find out how each or Ursula’s lives would turn out and eventually end. The book made me think and would be great for discussions. A God in Ruins was actually a bit of a struggle for me to finish. The magical realism wasn’t really there in this companion novel. It was just Teddy living his life. It was slow, quiet, and just like the previous book, very character driven. The problem for me was that I was not invested in the characters featured in A God in Ruins.

In Life After Life we are told how much everyone loves Teddy (teeny tiny spoilers here). He’s his mother’s favorite child, the neighbors like him, and his aunt even wants to adopt him. I never saw what was so great about Teddy. He was just a good kid and a nice person. The other main characters in A God in Ruins are Nancy (his wife), Teddy’s daughter, Viola, and Viola’s two children. Viola’s children are not given much page-time (especially Viola’s daughter) to feel invested in. Speaking of Viola, she’s awful. She felt like a realistic character for the most part (still don’t understand why she turned out as such a bitch), but I hated her.

Personally, I would have much rather had a book that focused on Sylvie (Ursula/Ted’s mother), Izzie (their eccentric aunt), or even Nancy. Their stories are spread throughout the two novels, but there are many mysteries and stories I’d like to hear from them. So in summary, this novel is very slow, focuses a lot on Teddy’s part in WWII, is a bit depressing, boring, and I disliked the ending. Still, it is written so well. I love Atkinson’s writing and her characters are very well fleshed out. I would still recommend this, but I just don’t think it was quite the right fit for me.