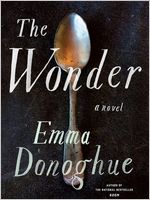 A little girl in a small, 19th century Irish village has become a sensation. People travel for miles around to see the Wonder- a girl who does not need to eat to live. To verify the accuracy of this spectacle a council has hired a nun and a nurse named Lib to watch the girl, day and night, for an entire week. Lib imagines this will be an easy job. She’ll find the girl out as a fraud in a few days at most. But what Lib actually finds is a bit more sinister.

I’m still debating on whether or not this was a five star read for me. It is best described as part historical fiction and part mystery. It is also very, very slow. I enjoyed the pace as it builds some suspense but it also allows for a lot of time to build up the characters. We’re inside Lib’s head as she tries to get to the bottom of things, but we also get to know Anna- the Wonder, her family, the townspeople, and the deliciously Gothic atmosphere. I found myself as skeptical as Lib about the whole ordeal, but later I flip-flopped between believing in Anna and calling her a fraud. The novel kept me on my toes even though it outlined every day of the watch. Somehow this was a page-turner for me, but it may not be for everyone.