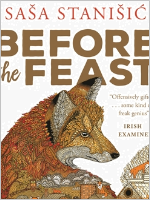 Well, this might be the biggest disappointment of the year so far. I’m not even sure how to give a plot summary as the synopsis of the novel does not match the book I read. Here’s what I thought Before the Feast was about: a mysterious death, an historic feast in a sleepy town, folklore, and magical realism. A mysterious death? The ferryman is dead we are told, but does that end up mattering? Not really. A feast in a little town, you say? Yeah, the title does not lie. We follow different people before the feast happens, but not much happens. Folklore? A bit. A bit of history intertwined as well, but more could have been done with it. Magical realism? Not really. Some things may not be what they seem, but it didn’t feel particularly magical. In summary? Nothing happened, nothing mattered.

OK, maybe that is pretty harsh, but I was very excited to read this. I will say that I did enjoy the small glimpses into the lives of a few of the characters. The novel felt very small town– everyone knew each other, there were local hangouts, gossip, etc. That part was great, but it felt like nothing came of the characters. We just kind of see them for a bit and then in the end they don’t have impact on the plot because there really isn’t a plot to begin with. A few things circled back and reached a kind of conclusion by the end, but I was left feeling very let down a little confused. This novel felt like it might have worked better as a collection of connected short stories about the town and its people and either add in more folklore, myth, and magical realism or just take it out and be a character study.