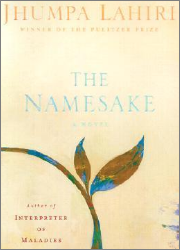 Newly married Ashima and Ashoke Ganguli leave India to become Americans. Less than two years later, the birth of their first child brings even more changes to their lives. The Namesake follows Ashoke, his wife Ashima, their son Gongol/Nikhil, and their daughter Sonali as they figure out how to fit into American life without leaving their heritage behind.

This is a very good immigrant story, but it left me wanting a bit more. This is really my own problem, but I’ve read a decent amount of immigrant stories from people around the world. I am dating an immigrant in the process of naturalization. I would say that I already have some idea of what challenges they face, but I am still not an immigrant myself. I felt like The Namesake only scratched a little below the surface of the immigrant experience. Though I did learn about a few cultural differences I feel like the Gangulis adjusted to America fairly well. They found many other Bengali people to befriend during the 60’s and 70’s, which surprised me. Speaking of the time period, it would have been interesting to know more about the immigrant experience specific to the time. I didn’t feel like the story took place in the 60’s, 70’s, 80’s, etc, except for a few passing references to American fashion or technology.

What really kept me from connecting to The Namesake was how it was written. The writing itself is good. The problem is the perspective. For example: although I liked the characters, I always felt distanced from them. The author tells us many things. She tells us about the history of a character. She gives us a detailed description of certain events, but I never felt like I was “there.” I’m not sure if it qualifies for the “show, not tell” mistake some writers make, but it did hurt my connection to the characters.

Despite my gripes, I enjoyed the novel. It is full of emotion and it highlights the struggles many immigrants face when they are far from home, must adjust to a new culture, and raise children who do not quite fit in. Especially if you don’t have much experience with this kind of story, you’ll find a lot to love in The Namesake.