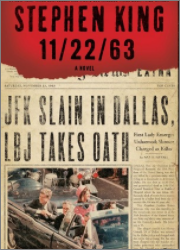 Well, I finally read my first Stephen King. I felt guilty reading a book by King’s son when I had never read anything by King himself. It’s silly; I know. I like thrillers, and I am starting to get less scared of reading horror. But I am also still a pretty big chicken. When I was looking for my next book to read, there was a lot of hubbub about the J.F.K. files being released to the public. So, with all that in mind, I picked up 11/22/63. It was a good choice.

Jake Epping is an English teacher who is at a crossroads in his life. He is divorced and feeling a little lost. Al Templeton, the local diner’s owner and Jake’s acquaintance, approaches Jake with a task; go back in time through the diner’s storage room, and save J.F.K. from assassination. Sounds easy enough, right? But the past is obdurate. Jake finds himself in 1958 with a new identity, a new haircut, a flashy new car, and an impossible task. What starts out as a cut and dry mission, turns into a love story with many very real dangers.

I instantly connected with Jake’s character. The prologue has Jake sitting at a desk, grading high school students’ papers. As a teaching assistant, I could relate to Jake’s feelings on grading and his dark humor. Jake is a smart character, a good man, humorous, and just very normal. He’s a fairly average guy in an extraordinary situation. I guess I don’t need to tell you how well King can write characters, but I liked a lot of the people in this book. It was one of those novels that you don’t want to end because you have to say goodbye to characters that feel like old friends.

Big surprise, but the plot was stellar as well. The almost ridiculous beginning hooked me because it was so out there, but somehow so acceptable too. A guy who owns a diner has a portal to the past inside a storage room. It sounds crazy, but it works. Once Jake goes to the past, things really take off. It doesn’t seem so crazy any more. It all feels real. I’m too young to have grown up in the 50’s and 60’s, but the book still felt nostalgic. I can see why many older people loved this time period with the all the dancing, good food, and neighborly attitudes. However, King did not hold back from the harsh realities of racism and sexism that permeated this era. It’s sickening at times, but it just goes to show that there has never been a time or place that was a utopia for everyone.

OK, so, what’s wrong with this book? Well, not much in my opinion. I gave it five solid stars on Goodreads. Still, I think it is very difficult to write a time travel novel. The hardest part is probably ending one. The ending was the worst part of this novel, but that’s not to say it was bad. I cried during the last few pages of 11/22/63, and I was happy enough with the ending. I certainly could not have written it better, but… well… I guess you can read it yourself and make your own judgment. It was still worth reading this 800+ page book.

Yes, I am a new fan of Stephen King. He can definitely write, and from what I can tell, he fathered some great writers too. I would like to read more from King, but I’m not sure I can handle something too scary. Suggestions are welcome!