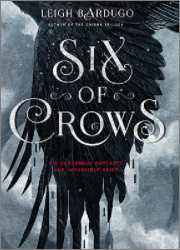 Everyone and their dog has been raving about Six of Crows since it came out. I was skeptical, but hopeful for this book. After reading quite a few mediocre YA fantasy books in 2016 (including the Grisha Trilogy), I took a break from the genre in 2017. I finally decided that Six of Crows had been sitting on my shelf long enough, so I read it. The verdict? Surprisingly good.

Kaz “Dirtyhands” Brekker and his crew are offered a huge amount of money if they can pull off a nearly impossible heist. They are tasked by a rich merchant to go into an impenetrable fortress and break out a prisoner who has knowledge of how to craft a very dangerous substance. Kaz and his crew all have different motives for taking the job. Can such vastly different people come together to complete this perilous task?

This is how YA fantasy should be. The Grisha Trilogy, also by Bardugo, suffered from tired YA tropes like love triangles, plain girl syndrome/Mary Sue, and the chosen one. The best thing about the Grisha Trilogy was the world and magic system. I was happy to see that Bardugo realized this and built upon the fantasy setting while also giving her character construction more attention. The characters have a lot of depth, motivation, and backstory in Six of Crows. The characters are also not all white and not all heterosexual. Bardugo has absolutely improved as a writer, and I respect that. She has also given me some hope that the YA fantasy genre can come out of its rut of repackaging the same story lines, characters, and tropes just to make a quick buck.

I have one major complaint. Just one complaint though! This might be a slight spoiler, but I will mention no names. OK, so there are six members in the group that go on the heist. It is very soon apparent that the six people are going to turn into three couples. Why? Why does everyone have to have a love interest? It does not seem realistic that everyone would end up wanting to date someone else in the very small group. To be fair, some couples have feelings for each other before they join the heist, but still… it doesn’t seem plausible. They are going on a very serious, very dangerous mission and they really have time to develop feeling for one another? At least the romantic relationships do not interfere much with the main plot. I would have been pretty mad if the romances took precedence over the cool adventure story.

I would definitely recommend this book if you like YA fantasy. I would also not worry about reading the Grisha Trilogy before you read Six of Crows. I just started Crooked Kingdom, Six of Crows‘s sequel, but I probably won’t write a separate review for it. Let’s just hope the series (and the YA fantasy genre in general) continues to improve!