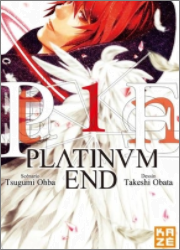 If the names Tsugumi Ōba and Takeshi Obata sound familiar, you have probably read or heard of Death Note. I found out that the writer/illustrator duo had a few other series together, so I picked one that sounded interesting to me. For better of for worse, I will be comparing Death Note and Platinum End in this review. (No spoilers though, I promise!) This is partially because the author and illustrator are the same and partially because I reread Death Note a few weeks ago, and I loved it all over again.

Platinum End is, like Death Note, about supernatural beings and the gray areas of morality. Middle schooler Mirai isn’t too excited about going to high school. Along with the usual drama of being a teenager, he has to contend with his tragic past, his terrible home life, and his depression. He is so depressed, in fact, that he tries to kill himself. But, just as he jumps off a building to end his life, he is rescued by his guardian angel. Mirai and his angel soon find themselves in a life-or-death competition with other angel/human pairs.

This story gets dark quickly. Everything about this first volume goes extremely fast, which is something I disliked. I understand that the plot needs to get on track and grab the reader’s interest quickly, but it was a bit overwhelming. The rules of the competition are laid down in chunks that feel a little unnatural to the flow of the story. The violence is also pretty abrupt and a bit unexpected so early on. This series, despite staring a younger cast, also seems much more sexual than Death Note. I realize that I am judging an entire series against the first volume of a new series, but I am trying to keep in mind how Death Note‘s first volume felt as I write this.

I am debating whether to continue Platinum End or not. The art is really nice, of course, and I think the plot has the potential to get better. Mirai seems to be an interesting character with some depth already. He appears innocent and sweet, but I also think he has the potential to become corrupted by power. Mirai’s angel, Nasse, seems cute and innocent, but I sense some fanaticism at the very least from her. I am curious about where the plot and character development will go, but I just really hope the pacing slows down a bit. I also hope that the series deals with mental health in a positive way, but I am not sure if it will. Three out of five stars for this volume!