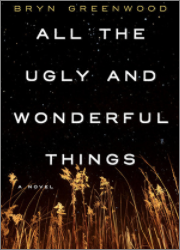 To be honest, I am little afraid to review this book. But, if you’re reading this, then I must have posted it! All you have to do is go to the Goodreads page for this book to see why I am shying away from this review. You’ll see words like pedophilia and rape. This book involves a relationship with a man in his twenties and a girl who meets him when she is only eight years old. It is not quite what you might think, but if that bothers you (rightly so, might I add), then do not read this book.

Wavonna “Wavy” Quin is the daughter of a meth dealer. Her father is either selling meth or is out with women other than his wife. Wavy’s mother is stoned out of her mind most of the time. When she is awake, she is abusive. selfish, and neglectful to her children. Wavy must fend for herself at a very young age, and she is the only person responsible for her little brother’s upbringing. At the age of eight, she finds Kellen, her father’s mechanic, bleeding and laying on the side of the road after a motorcycle crash. Wavy saves him, and after that night, he tries to make her life better by taking care of her and her brother. As the years go by, it is evident that Kellen and teenage Wavy have a mutual affection for each other, despite their age difference. Wavy’s family, friends, and extended family all become involved in a whirlwind drama with drugs, death, and a very strange love story.

Everything else aside, the book is written well. The plot had me turning pages, the characters sprang to life, and at the end, I cried. Some chapters were narrated by characters other than Wavy and Kellen, so there were multiple viewpoints of the same events. This made me see the relationship between Wavy and Kellen from different angles. It also served to give the reader a view of how much the two actually care about each other, but there could also be room for some discussion on the reliability of the narrators, especially Wavy and Kellen. The characters were great though! They felt realistic, they made mistakes, and their actions/motives felt true to their characters.

I have seen some reviews that say that Kellen groomed Wavy from a young age because he wanted a sexual relationship with her. According to some, he helped her and gained her trust to eventually seduce her. Though that could very easily happen in a real-life scenario, I do not believe it is the case in this novel. Kellen is not attracted to little girls in general. He has other, albeit brief, relations with women his age and older, and he likes pretty “vanilla” pornography. Kellen struggles with his feelings for Wavy because he knows it is wrong. But, as she grows older, their feelings stay the same. When Wavy was over the age of consent, I definitely felt better about the relationship. I still rooted for Wavy and Kellen to have a happy ending together, but despite all that, it still felt weird at times. Despite that, I still liked the book.

Maybe that makes me a bad person. I can certainly see why people dislike this book and other books like it (side note– I have never read Lolita). I think taking advantage of children is more than terrible, but if you’re two consenting adults, I could not care less what you do. Maybe Wavy was taken advantage of in some ways, but I also believe that Kellen and Wavy helped each other a lot. That, I think, is the point of the novel. Life is hard. It sucks. People that you should be able to trust can be awful. It is very important to have some kind of family support. I am not trying to sway anyone to read something that makes them uncomfortable, and I am certainly not defending pedophilia of any description or degree. I just think the novel has a lot more to offer than the draw of a shocking and taboo relationship. I also think that it should not be judged solely because of the controversy. Reading with an open mind can create discussion, and that is honestly what interests me the most about such a strangely touching narrative like this one.