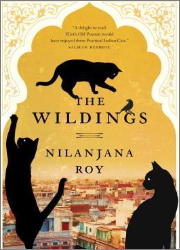 Did anyone else go through a phase of reading books with anthropomorphic animal characters? I’m talking about things like Redwall, Watership Down, The Warriors Series, or The Sight. I used to love any book, TV show, or movie in the same vein. Once in a while I become nostalgic and read something similar. That is how I picked up The Wildings (well, that and I loved the cover). Although I enjoyed this novel, I can’t help but think I would have enjoyed it more if I were younger.

The novel takes place in Delhi, India and follows a clan of wild cats. The clan is comprised of Miao, the elder siamese; Katar, the co-leader of the clan; Hulo, a male warrior; Beraal, a female warrior; and Southpaw, a troublesome orphaned kitten. The cat clans of Delhi live in relative peace with one another and the other animals they share the city with, but one day a Sender named Mara arrives and everything changes. A Sender is a special cat who can communicate long distances with other cats and who can communicate with and befriend other species (except perhaps humans).  The problem is that the clan’s new Sender is an indoor cat, while they are all outdoor cats. With the threat of some feral cats escaping into the city to cause havoc with the established order between clans, the fact that the Sender will not leave her humans’ home, and the other everyday trouble associated with life in the city, the cat clans of Delhi have a lot to contend with.

I have seen The Wildings marketed as YA fantasy, and I would agree with this classification. There is a good bit of violence and cat fighting, but I did not feel it was too graphic. Mating is mentioned, but again, nothing is graphic. In fact, nothing much is said about mating besides the fact that it is a thing that happens and that kittens are the result of it. There are many chapters where the cats are just being cats. The kitty antics will definitely remind you of your own pet cats at home. This is very fun and cute, but the cats are respectable and honorable hunters as well. The writing is also quite descriptive. The sights, sounds, and smells of Delhi are immersive. It also helps that the cat protagonists are so sensory driven. Sometimes animal protagonists can feel too humanized. The cats in this novel felt like cats and behaved realistically, but they were still emotionally relatable.

However, as a cat lover and owner, I was a little troubled by how the plot revolved around indoor cats going crazy or becoming evil. Outdoor cats are portrayed as the natural and preferred way to be a cat or any other animal. This is a debatable topic for humans of course, but making a cat point-of-view novel take a rigid side on the topic felt odd since we do not know what cats are thinking about the indoor/outdoor debate. (I feel like I know cats who would passionately argue both sides!) The outdoor cats are distrustful and prejudiced against indoor cats. I expected that the lesson learned would be that the outdoor cats should not judge others so harshly, just as we humans should not judge others. But no. By the end, the consensus was still that all cats should be outdoors, otherwise they will become warped and evil. There are some parallels between house cats and tigers in a zoo the novel, but I don’t think that is a fair comparison to make. I understand that part of the point was that when indoor cats go outside, they can and often do kill wildlife without eating it. And, according to the novel, outdoor cats develop a respect for wildlife and only kill when they are hungry. But, as a human reader with two very spoiled, healthy cats, I felt uncomfortable with the underlying message that all cats should be outside. Still, there are some good messages about respecting nature and wildlife, and as we all know, humans can be terrible to both.

OK, OK, ranting aside, I still had fun with this novel. My main literary criticism is just that the author could have taken everything a bit further. A cat POV novel has a lot of potential, especially when you bring in other fantasy elements. The cats communicate through a form of wifi-like whisker maneuvers, which is cool. The cats can project thoughts and images over distances, but the mechanics of this ability and the role of Senders are not explained much (this system is expanded on in the sequel at least). There is also a multi-species battle that could have been expanded upon more. It did not feel nearly as epic as it was built up to be. The plot in general felt a little one-dimensional. There were bad cats, good cats with very little morally gray area in between. The indoor/outdoor debate and the prejudice against different cats could have been utilized more to explore the depth of the characters’ personalities and beliefs as well as leave more open-ended questions for readers to ponder over.

Initially, I rated The Wildings 4 out of 5 stars, but I think it is more a of 3 or 3.5 for me. My younger self would very likely rate it 4 or even 5 though. So, if this sounds like something you or a young reader you know would like, give it a shot. It is a cute, fun, fairly unique little story. I am currently reading the sequel, The Hundred Names of Darkness, and I will probably rate it about the same as The Wildings for many of the same reasons I have discussed in this review.