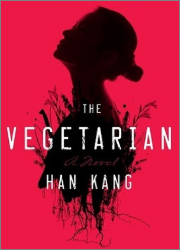 The Vegetarian won the Man Booker International Prize for 2016, so that’s pretty good. And, in my humble opinion, it is a pretty good book. It’s also pretty damn weird.

Yeong-hye has suddenly decided that she is a vegetarian. When asked why she wants to become a vegetarian, she only responds with the answer, “I had a dream.” Her family and husband greatly disapprove of her change in diet, not only because they are worried about her health and weight loss, but they also dislike Yeong-hye’s strange, distant demeanor. Yeong-hye disobeys her family and societal norms in an attempt to live her life the way she chooses.

The Vegetarian is divided into three parts. The first part is from Yeong-hye’s husband’s perspective as he notices her behavior changing. The second part is from Yeong-hye’s brother-in-law’s perspective as he struggles with his marriage to Yeong-hye’s sister, In-hye, and his career in art. The final part is from In-hye’s perspective as her own life unravels and her sister become more unstable. Yeong-hye’s husband, brother-in-law, and sister all focus on Yeong-hye in their respective sections, but we see parts of their own lives and personalities through their reactions toward Yeong-hye. Interestingly, we barely see Yeong-hye’s own perspective, despite the novel being all about her. In her husband’s section we do see a few paragraphs in which Yeong-hye describes her dreams and her feelings associated with them, but that’s it. Because of this narrative choice, we can see that Yeong-hye is viewed very harshly by everyone around her. Those closest to her probably judge her even more harshly than society does.

I’ve heard many people say in reviews that the whole plot of the novel is an allegory. It is true that you can read multiple meanings into the story itself. On the surface, the plot is just a bit strange. Yeong-hye, if she is truly committed to vegetarianism, would not be losing a lot of weight and looking unhealthy. You can be a healthy vegan or vegetarian, of course. So, what is the story trying to say beneath the surface? I hesitate to put my own interpretation of the deeper meaning out there because it might spoil something if you haven’t read the novel, but various reviews have said the novel is about society’s view of women, feminism in general, South Korean families and culture, mental health, marital happiness, and art to name a few. This is a tiny (less than 200 page) book with a lot going on inside of it. I’ll throw out a general warning that the novel also talks about sex and rape, and sometimes the descriptions are a bit weird and surreal.

At the end of the day, I would recommend this title. It is worth reading for the conversation it creates about the aforementioned topics alone. The Vegetarian reminds me of a slightly more realistic Haruki Murakami novel with a bit more sex and more focus on female characters. The Vegetarian is an interesting experience, and readers who love literary fiction would likely enjoy it.