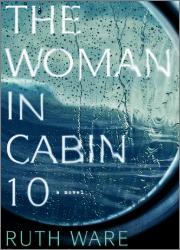 I love mystery/thriller novels, but I realized I had read all of mine on my to-be-read shelf. This led me to discover a little app called Scribd where I could download and rent audiobooks, ebooks, and magazines for a small, monthly fee (less than Audible with unlimited books, not sponsored of course). Since I was also going on a 12 hour drive, I decided I needed something audible and suspenseful to keep me awake. I had never read anything by Ruth Ware before, but I knew she had been getting some buzz about her novels. So, I chose The Woman in Cabin 10.

Laura “Lo” Blacklock gets a chance report on an exclusive cruise ship for the magazine she has been working at for several years. This could be her big chance to make a name for herself as well as schmooze with rich and influential people. The perks of getting on the luxurious cruise with a press pass don’t hurt either. Lo is installed in cabin nine of the small cruise ship. Before the first night’s dinner on the cruise, Lo meets a strange young woman in the next door cabin– cabin 10. Lo continues with her night of drinking and getting acquainted with the rich and famous passengers, but she never sees the woman from cabin 10 at dinner. When Lo finally lays down to sleep, she hears a scream and a splash from the direction of cabin ten’s balcony. Lo reports what she has heard to the crew, but… no one is registered to cabin 10 and no passenger or crew member is missing.

I liked quite a few things about this novel, but in the end it was a middle-of-the-road read. I liked the closed setting of the cruise ship in the cold sea. The writing was not extremely descriptive, but it set the tone and atmosphere very well. The suspense built at a steady pace until around the halfway point. After perhaps 60-70% of the book, things began to fall apart for me. Up until that point, the plot felt like a very entertaining nod to an Agatha Cristie novel. Then, well… things got weird.

Let’s back up a bit. My main dislike throughout the novel was our main character, Lo. The novel is told from her first-person perspective, so we get into her mind a lot. Despite being in her head, she made some odd decisions that I could not understand her logic for. At one point, Lo is scared and alone in her apartment at night. She has had a traumatic experience with a burglar earlier that day, and everyone makes a point to tell her that burglars commonly return to a place they have burgled before. Understandably, she cannot sleep, but she decides it is a good idea to leave her house with its repaired and improved door locks while in her pajamas after midnight and walk around the city. There are also a few smaller examples of her questionable decision making, like the instances when she gets drunk even though she says, repeatedly, that she should not. She does very little research on the cruise when it is supposedly a career making opportunity. She is assaulted by a man, but cries on his shoulder in the next scene. There were multiple instances of me yelling at the audiobook for her to do something. At times, Lo is frustratingly passive about what is happening around her.

My favorite part of a novel like this is getting to know the side characters and guessing who the bad guys are. The Woman in Cabin 10 did this for a bit, but as I said, near the end it lost its way. The climax felt sudden, and the resolution did not make a lot of sense. Again, Lo made some odd decisions. She trusted people she should not and told other people things she should not. She did not listen to explicit advice from other characters. It is stated that she has depression and anxiety (and perhaps a drinking problem), but that does not explain her lack of logical thinking and carelessness.