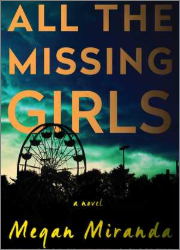 Nicolette Farrell is back in Cooley Ridge, North Carolina for the first time in ten years. As a teenagers, Nic, Beth, and Corinne tore up their small town. They were always taking risks, causing trouble, and the rumor was that they swapped boyfriends sometimes. Those wild, carefree days came to an abrupt end when Corrine disappeared. After her disappearance, Nic moved away from everything she knew to start a new life. Now Nic’s father is ailing, and her brother has called her back to help sell their father’s house. But soon after Nic returns, another young girl goes missing.

The gimmick of this thriller is that it is told backwards. There are few chapters in “present time” to orient the reader, but then the story skips ahead a couple of weeks. From then on, each chapter tells about the previous day’s events. So, after the first few chapters, we start on Day 15. The next chapter is Day 14, then 13, 12, etc. Slowly everything is revealed about Nic, her past, Corinne’s disappearance, and the new disappearance Nic is present for. This is a creative way to organize the plot, but I felt that the execution was imperfect. I am not saying I could do better, but as a reader, it was sometimes a bit hard to keep things chronologically in my mind when the book/plot was going backwards. Beyond that, there was not anything too special about this thriller. It did the small town mysterious vibe very well though.

Organizational choices aside, how was the rest of the novel? It was OK. There were a good number of twists, and some caught me by surprise. There were quite a few secondary characters that matter to the plot. They are written well enough to not be confused with each other, but none of them stand out. I had to look up some of the characters’ names (including the main character’s) even though I only read the book a week ago. No one was very memorable.

Some of the conflicts in the novel made me frustrated. I am beginning to really hate when characters have disagreements that are easily solved by simply communicating. I realize that miscommunication happens a lot in real life, but sometimes these characters (mainly Nic) would neglect to tell another character something important, only to have it come back to bite them in the ass later or it created some misunderstanding that could easily have been prevented. Nic is a character that has a lot of secrets, but I could not always get behind her actions and decision-making. Still, she was not as frustrating as the main character in The Woman in Cabin 10…

So, yes, this was a very “OK” read. It was nothing too special, but I did blow through the first half of the book in one day. Of course, it took me about a week to pick it back up again and finish it. If you would like to read a small town domestic thriller with a uniquely organized plot, you might want to try All the Missing Girls.