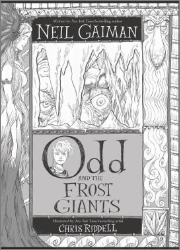 What would 2019 be without some Neil Gaiman? The edition I chose to read is illustrated by Chris Riddell, who sometimes provides illustrations for Gaiman’s works as well as writes and illustrates his own books. He and Gaiman have worked together on editions of Gaiman’s The Graveyard Book, The Sleeper and the Spindle, and Fortunately, the Milk… I absolutely love Gaiman’s fun, fantastical stories being accompanied by Riddell’s fairy tale-esque, full-of-personality illustrations.

Odd and the Frost Giants follows a boy named Odd. Odd’s father died in a Viking raid, and his mother married another man she was not in love with. Odd, unhappy with his new living situation, leaves his village to stay in his father’s woodcutting hut. He meets three strange animals in the forest who are much more than they appear to be. It is up to Odd to help the animals reclaim their true forms and their homeland.

In case you don’t already know, Odd and the Frost Giants is a short, lighthearted story about the Norse gods Odin, Thor, and Loki. Picture it as Neil Gaiman’s Norse Mythology-lite. It is a simple adventure story that would be appropriate for both young and older readers, but the language is not overly simplistic. If you have some knowledge of Norse mythology, you will find a few Easter eggs and nods to other Norse myths in Odd, but having little to no knowledge will not hinder your enjoyment of the tale at all.