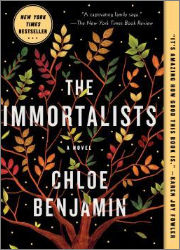 A few months ago, I picked this up, liked the first chapter, and then put it down because I became too busy. Earlier this month I picked The Immortalists up again, and I regretted it. Not because it was horrible. I simply did not get along with it at all. Why? Well, it’s definitely a “me” thing. If you are not in good place mentally, you may want to avoid this one for now. It could be triggering to anyone who is sensitive to reading about grief, trauma, suicide, self harm, or abortion.

It’s New York City in 1969, and the Gold children, Varya, Daniel, Klara, and Simon, escape their parents’ apartment long enough to visit a woman who is rumored to have the ability to predict the day you will die. The children receive their predictions with mixed reactions, but such a simple and supposedly “fun” outing ends up complicating all of their lives for many years to come. The Immortalists follows the Gold children into adulthood as they experience the unique challenges that the 80’s, 90’s, and the new millennium brought to the United States. The novel is broken into four parts, with each part following one of the Gold children.

Fortune telling, death days, family, and historical fiction, it all sounds great! The reality is that this is really just a historical fiction family saga with a little magical spice thrown in. That’s still an interesting premise, but if you are excited about this being a magical realism novel, you might be disappointed. After the fortune teller gives them their death dates, the rest of the novel focuses on the characters’ adult lives. Though the day of their deaths obviously play a large role, it is more of an underlying driving force than being in the forefront of the plot.

I really enjoyed seeing different parts of the country at different points in time. We get to see New York in the late 60’s and early 70’s and San Francisco and Las Vegas in the 80’s and 90’s. Although the book was not very descriptive or atmospheric, it was nice to see such an interesting historical backdrop to the family drama. The family isn’t overtly dysfunctional, but as time goes on, it is easy to see the cracks in the family’s foundation, which is what the novel is mostly about. The family as a whole have some issues with communication and openness, but more and more issues crop up as their death dates approach.

I couldn’t help thinking that a lot of what was predicted became a self-fulfilling prophecy. In particular, a couple of the children made some (in my view) very odd, out-of-character, and just plain bad choices that led to very bad things happening. A few of the family members likely had some mental illnesses and issues with trauma, but I had a hard time believing some of the characters’ reactions and actions. I know I’m speaking in extremely general terms here, but hey, that’s the trade off when I try not to spoil anyone!

The family is Jewish, and I liked that their faith actually played a role in how they processed their problems and viewed the world. Each child of the family even had a different way of viewing and utilizing their faith, and some were more optimistic than others, of course. There were also some very beautiful lines and some interesting connections between main and side characters. The characters were all pretty “gray” in that no one was always perfect or good. They made mistakes and did morally questionable things, but no one was painted as a true bad guy either. There are touches of levity and humor, but the novel as a whole I would describe as melancholy.

The book is about life, and life isn’t always great. The choices you make can be far-reaching, and the impact certain people make can change the course of another’s life. The book is often sad, but if you have recently lost someone, I could see how it may also be comforting. For me, it was not, but everyone copes differently. I hesitate to rate this one. For pure reading enjoyment, 3/5 stars. However, the book was not bad, but as far as family sagas go, it was solid but not standout.