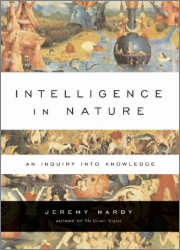 After reading The Genius of Birds and loving it, I was on the hunt for another nonfiction book on animal intelligence, preferably something with a wider of array of animals to discuss. Jeremy Narby’s Intelligence in Nature sounded like it was exactly what I was looking for. Spoiler: it was not, but that doesn’t mean it was bad.

Intelligence in Nature is a bit of a travelogue with some research findings mixed in. There is a definite anthropological spin to the book, as Narby meets with and interviews several natives of the regions he travels to. He interviews healers, guides, and several shamans. He asks them about their views on intelligence in nature, and he collects a variety of beliefs and responses. Narby also includes recent research regarding intelligence in animals, plants, and microbes as well as meetings with experts in scientific fields. Narby presents a variety of views of intelligence in nature, but as a whole the book feels a little disjointed and slightly off topic.

While it was interesting to hear what the shamans and healers had to say about their world, I was hoping to read about more scientific, concrete discoveries. I liked when Narby introduced the shamans to some ideas of modern science, but ultimately, the content of the book did not quite match the title or synopsis, in my view. I was looking for some in depth explanation and analysis of intelligence in other organisms, but Narby glossed over some of the details in favor of an anthropological approach to the subject.

Intelligence in Nature was a slight disappointment because its content didn’t quite meet my expectations, but it was still an interesting and informative read. It would have benefited from a little more organization of the ideas presented in the text, but the journeys Narby took and the people he met along the way bring a unique perspective to the topic of intelligence in the natural world. I rated the book 2-2.5 out of 5 stars.