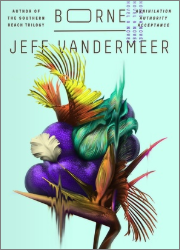 Do you ever find a new author, read and like a book or two they wrote, then all of the sudden realize that you found a new favorite author? Well, that’s what is going on with me. I’ve read and reviewed two other books from Jeff VanderMeer, Wonderbook and Annihilation. I really liked them both, and he might be the author to finally get me into the sci-fi genre. But enough about me. Onward to the review!

Rachel survives by scavenging in her ruined, half-abandoned city. The whys and hows of the city’s destruction is a bit of a mystery, but the city’s fate is closely tied to The Company’s. The Company’s experiments and disregard for humanity as well as the natural world are at least partially to blame for the city’s downfall. In fact, The Company’s biggest and most terrible experiment now lords of the city in the shape of a giant, violent, flying bear named Mord. On one of Rachel’s scavenging trips she finds a strange plant-like creature. She takes it home, not knowing exactly what it is. Rachel’s partner, Wick, disapproves of the strange creature, but Rachel cannot bring herself to give it up. Things become even more complicated when what she thought was a plant becomes a sentient being.

Is this one of those Bizarro fiction things? I mean there’s a giant, flying bear terrorizing a city, after all. No, skeptical reader! Don’t let the flying bear distract you! This book has a lot of heart and serious themes, actually. If you read Annihilation, or the entire Southern Reach Trilogy, you might be skeptical of that statement too, as I have seen many readers complain about Annihilation and its sequels lacking in character depth clarity of plot. Yes, Annihilation is a bit odd, and it does not fully explain everything. Borne’s plot is much more focused, and I was more attached to the main characters. Was everything perfectly explained? No. For example, if you want to know why the bear flies, well, he’s been experimented on, and that’s really all the book tells you. If details like that bother you, you might not like it. The science isn’t super scientific. This isn’t The Martian.

As I mentioned, the characters in Borne are more refined and easier to connect to than those in Annihilation. However, like Annihilation, Borne is written in first person from the perspective of a female character. VanderMeer writes from a female perspective well. Rachel is intelligent, strong-willed, caring, and resourceful, but she also has flaws and makes mistakes. Wick, her partner, is also a good character, but he was more difficult to connect to because of his murky past and because we are reading from Rachel’s perspective. And of course, I have to mention Borne himself. I don’t want to give too much away, but it is hard not to love this non-human character because he is so human.

As for the plot, I liked it, but it felt a little less experimental than VanderMeer’s trilogy, which might be better for some readers. As I said, the plot is much more clear-cut in Borne. The plot takes some predictable turns, but it was still a very unique and engrossing read. The ending wraps things up very well, but I found myself wishing that a few more events, characters, and creatures were explained in depth. This isn’t to say that there are huge plot holes. I just wanted to know more about the world and what happened to the city. The world building feels very vast. The city feels both desolate and feral, but the wider world is mentioned here and there, giving a sense that maybe there’s many other stories to tell.

One last thing I want to mention is why I, specifically, liked this novel. Your mileage may vary. As someone who has always enjoyed fiction and non-fiction that deals with the environment and nature, VanderMeer’s work just clicks with me. His descriptions of plants and animals and how humans connect with and exploit the natural world is just great. He examines so many themes of environmentalism, society, and humanity in a sci-fi novel with a flying bear in it. That impresses me! There’s a lot of emotional and intellectual depth in Rachel’s musings too. This is the first sci-fi novel that I have read that felt literary.

I debated on rating Borne 4 or 5 stars, but ultimately went with 4. It was a great read, but I expected the main story arch to be slightly less predictable, and well, I just wanted more from the book. I’m a harsh judge though, and even as I write this I am considering raising my rating…