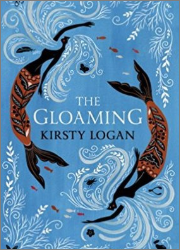 In the fall I like to read Gothic tales and historical fiction– things that are a little gloomy and brooding. The Gloaming by Kirsty Logan fits this mood as well. If you recall my review of The Gracekeepers by the same author, The Gloaming is supposed to be a “spiritual prequel,” though it has little to do with her other novel, and you do not need to have read The Gracekeepers to understand or enjoy The Gloaming.

The Ross family lives in a very large, pink house on an island where people turn to stone instead of dying. In the Ross family we have Peter and Signe and their children, Islay, Mara, and Bee. As with any family, people change, grow, and go away in one way or another. Islay and Mara are both becoming young women, and they must decide whether to stay on their island or find a home elsewhere. The novel includes themes of grief, romantic and familial love, fairy tales, and growing up to name a few. We follow Mara, Islay, and their family throughout a few years of hardship and acceptance.

The Gloaming is a melancholy little novel. Kirsty Logan’s writing is always beautifully descriptive and lyrical but not over written. Her descriptions have an economy to them, and she easily sets the tone of a scene in a few well-chosen sentences. The writing is easily one of the strongest parts of The Gloaming, but that is up to personal taste to some extent. I also enjoyed the characters. I especially liked how Peter and Signe’s relationship was portrayed almost mythically in the beginning of the novel, but as time goes on, the reader learns more about the reality of their relationship’s beginning and a more realistic story unfolds. Mara and Islay both grow up and change in ways that may be surprising but are realistic given their circumstances.

I enjoyed the experience of reading The Gloaming, but the atmosphere and interest in the characters wasn’t quite enough for me. I wish there had been more of a plot. An event tests the family’s bond, which is the catalyst for the novel, but from there it withers out. There’s a love story, some family drama, and of course some death, but there is a lack of direction or urgency. There’s a slight threat in that people turn to stone instead of die on the island, and there’s something about a bridge connecting the island to the mainland, but not much really happens with that until the abrupt ending.

It’s a very character driven novel, and that’s fine for some people, but even I wanted a little more plot to guide the narrative. There are also many flashbacks that slow the pace even more, though they do add a lot to the character development. However, I do wish that some parts of the characters’ lives were shown in more depth. For example, I wanted to see where Islay and Mara went when they parted ways. The ending was also a bit disappointing. It is open ended, but a major event suddenly solves some of the potential plot lines (like the bridge), which felt a little unsatisfying.

This is a novel for people who enjoy fairy tale influences but don’t need a solid plot. If you enjoy character driven novels that are a little dreamy, a little gloomy, this might be perfect for you. For me, it was about a 3.5 out of 5 star read. Enjoyably moody and thoughtful but lacking a little in the plot area.