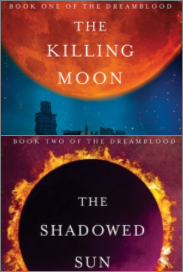 The Dreamblood Duology consists of The Killing Moon and The Shadowed Sun by N. K. Jemisin, who is one of my favorite authors. The duology takes place in the fictional city of Gujaareh where peace takes precedence over all else. Within this city are priests that serve the goddess Hananja who rules over the realm of dreaming. These priests harvest dream ichors to both heal and harm citizens in order to keep peace in the city. This series is marketed as an Egyptian-inspired fantasy, and though I agree that this is a loose way to explain it, the world building and magic system are themselves very unique.

In The Killing Moon we follow the Gatherer Ehiru, his apprentice Nijiri, and Sunandi, a diplomat of a neighboring city-state. Gatherer Ehiru is tasked with eliminating those in Gujaareh who are deemed corrupt. But although Sunandi is judged as corrupt, Ehiru finds that the two of them actually have similar goals, and in fact there may be corruption within Gujaareh itself instead. The characters struggle between what they feel is right for themselves and the city and what is their duty.

The Shadowed Sun takes place about a decade after the events in The Killing Moon. Readers get to see the aftermath of the changes in Gujaareh from book one, which is something you do not see too often in fantasy, and it made the world feel more realistic because things are always changing. In the sequel we travel the lands beyond Gujaareh’s walls, explore other paths in the worship of Hananja, and see more of the magic that the priests wield. I don’t want to spoil too much, but this book deals with more political maneuvering in Gujaareh as well as a mysterious dreaming sickness that is spreading around the city.

These books are some of Jemisin’s earlier works, but you can clearly see she excels in both world building and character building even at this point in her career. The world and the magic system are very unique and well developed. I could see the Egyptian influence, but I quickly forgot about it and enjoyed the culture and magic as separate, new entities. To me, she perfectly built off of real life ideas and histories but made them stand on their own. Too often I see authors draw too much or not enough from their influences, but Jemisin hits the balance here perfectly.

Although I love her characters in The Broken Earth Trilogy because they are truly human and jump off of the page with personality, The Dreamblood Duology shows her progress in character development. I have seen several reviewers say that they preferred The Shadowed Sun to The Killing Moon, but I would disagree. I just found the characters in The Killing Moon easier to connect with and enjoyed their personalities and stories more. However, in both novels the characters make believable mistakes and grow from them. Many have grey moral areas, and being true to life, not everyone survives the trials they face.

I fell in love withe culture and magic system in book one, and I really enjoyed seeing both of them fleshed out in the sequel. The fact that peace is what guides the city’s decisions made for a thought-provoking reading experience. I enjoyed considering the practices and beliefs in Hananja’s teachings and how they compared to those in modern America. For example, though someone was judged as corrupt, the Gatherers tried very hard to give even their enemies peaceful deaths. Both books have intricate plots that involve politics, religion, family (both biological and found families), love (romantic and otherwise), and questions of morality.

I would give the series as a whole four to four and half stars out of five. It is hard to find fault with either novel, and they are both well above average in terms of what is available in the genre, but I find Jemisin’s later works a notch above this one in all of the aforementioned areas. If you enjoyed any of her other works, you’ll very likely enjoy this series as well.